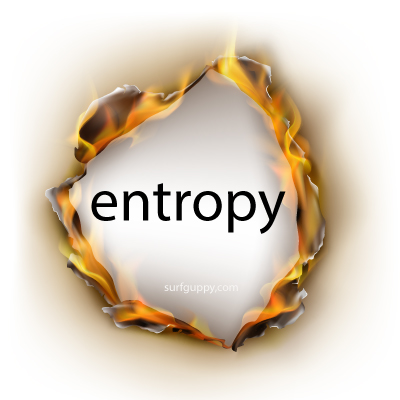 What is entropy? Entropy refers to the amount of unusable energy in a system.

First of all, entropy is the concept that everything in the universe tends towards disorder. For example, all living things age and die, they don’t get younger. Mechanical things tend to wear out and break down. Bricks are not naturally stacked up nicely or become part of a building unless someone has put a lot of effort into making it. So, disorder is more probable in the universe than order.

Entropy Change from Viziscience on Vimeo.

Thermodynamics is just a branch of physics that studies heat and other forms of energy (mechanical, electrical or chemical) and their relationships between each other.

1) The Law of Conservation

2) The Law of Increased Entropy

While quantity remains the same (first law), the quality of matter/energy deteriorates. As energy is used for productivity – such as growing new cells or repairing tissues, useful energy is converted to unusable energy.

The Second Law of Thermodynamics states that once energy is changed from usable form to unusable form, it cannot be recovered.

Entropy is a measure of that unusable energy.

Energy transfer is studied in three types of system. It is important to understand what they are.

There are quite a few variations for the definition of entropy. One idea that often leads to misconceptions is that “entropy is a measure of disorder.” One tends to think about patterns when the word “disorder” or  “randomness” is used.

As described earlier, how do you measure  disorder? Is it by how far molecules are apart from each other? Is it by the arrangement or pattern of molecules, particles, or objects? If you have a pack of cards randomly spread out a table next to a pack of cards neatly stacked, you may say one is more random than the other.

Below, group B & C cards are more randomly placed, but the properties of the cards have not changed. All three groups still have the same arrangement of molecules more or less and they have not undergone any heat or energy redistribution. So, a change in entropy has not taken place in any of the three groups of cards regardless of how they are arranged. 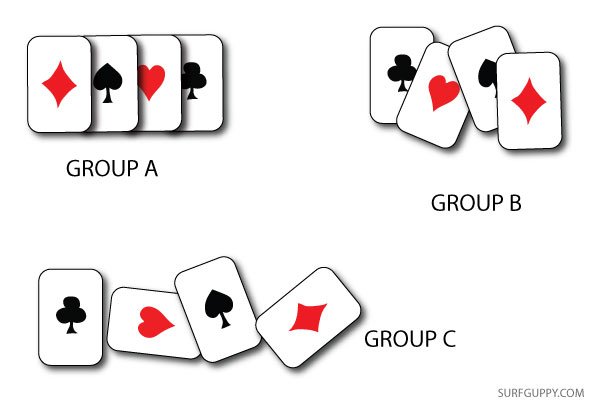 First, to burn the cards,  you apply activation energy by means of lighting a match to it. The cards would then catch fire and burn spontaneously. The cards made of paper have potential chemical energy. Burning objects causes the potential energy in the materials to change. Some of the energy is transformed into thermal energy and dispersed into the atmosphere. Entropy is said to have increased. Overall, the burning of the set of cards adds to the entropy of the universe slightly. So, the more people burn cards, the more the entropy is increased in the universe!

When energy is dispersed, useful energy is turned into unusable energy. In burning a pack of cards, the bonds in the molecules of the cards are broken and new molecules (eg, carbon dioxide and water vapor) are made. The heat produced from the process escapes into the atmosphere. Once the burning has stopped, the temperature difference between the cards and surrounding air evens out and thermal energy movement ceases. Heat can only move from a place of higher temperature to lower temperature. If everything is at the same temperature, then heat energy cannot transfer. At this point you can say work is done – completed! Equilibrium has been reached and you won’t need to call the fireman out to kill the fire. 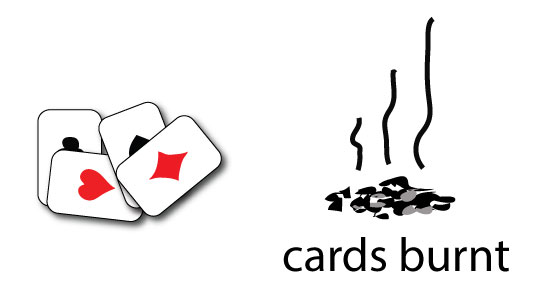 The Second Law of Thermodynamics states that entropy in the universe always increases. This is true if the universe is an isolated system, where you would be unable to put in or remove energy. It starts off with a certain amount of energy, and due to decay, all the usable energy will eventually be converted into unusable form. So even if you don’t burn the cards, over time, after many years, perhaps thousands or millions of years, the cards will eventually disintegrate. So, entropy increases over time. In that sense, everything tends towards disorder. Not disorder in the sense of the arrangement or patterns of things, but  in the breaking down and degeneration of matter from usable to unusable energy. You can understand why scientists say time cannot go backwards; it only proceeds forward! 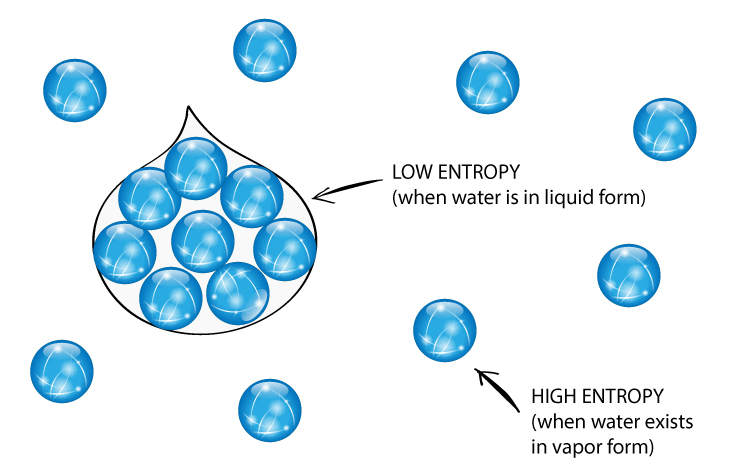 One useful way of measuring entropy is by the following equation:

Using this equation it is possible to measure entropy changes using a calorimeter. The unit of entropy is J/K.

How do you predict if a chemical or physical change is going towards orderliness or randomness? There are three principles you can apply.

Entropy of a system

One thought on “Entropy”